Fed shifts back to neutral citing international concerns and uncertainty

In its semi-annual report to Congress on monetary policy, the Fed was very explicit about the way forward: “Potential downside risks to international financial stability include a downturn in global growth, political and policy uncertainty, an intensification of trade tensions and broadening stress in emerging market economies. Volatility in financial markets and increased concerns about global growth made the appropriate extent and timing of future rate increases more uncertain than earlier.”

Translation: All bets are off on future interest rate increases, as the Fed takes a wait-and-see approach going forward. Central bankers had recently been changing their collective tone regarding future rate changes, slowly pivoting away from previous hawkish commitments. The message now is to pause, a move welcomed by Wall Street and investors across the globe, but once again the Fed appears to be in a stuck place, without a good roadmap on what next steps should be.

Chairman Powell is testifying before Congress this week, a semi-annual ritual to answer questions about monetary policy. He will continue to say that the U.S. economy is performing solidly and that inflation is in line with the Fed’s target of two percent. From the Fed’s perspective, the continuing risks to the U.S. economy are trade tensions and Brexit, but more kicking of the can down the road seems the natural course.

The persistent strength of the U.S. Dollar is also disconcerting, as it helps to keep inflation in check, while maintaining pressure on emerging market countries with Dollar –denominated debt service liabilities looming large. The U.S is not without its own debt problems either, as one analyst conceded: “The next big battle is coming, and it is over how much the US owes. The national debt just climbed over the $22-trillion mark, which will lead to discussions, fights, finger pointing, and accusations over the debt ceiling.”

Fed watchers and economists alike are also troubled by an inflation track record that has not really performed as expected. The Fed has used two inflation measures, both based on Personal Consumption Expenditures, but one adjusted for prices connected with energy and food, the so-called “core index”. If you review the previous decade of recovery, there are only a handful of instances where the two measures did not fall below the intended target of two percent.

Diane Swonk, chief economist at Grant Thornton, noted: “The world is not operating by the old rules. Inflation is simply not responding to low unemployment, strong growth and faster wage rises. In the short term this means the Fed has stepped to the sidelines on interest rates and the balance sheet. In the longer term they will rethink their inflation target, and you are starting to see them build up the case for this.”

The Fed has relied upon a model that related inflation to unemployment, but wage gains have not been present until recent recording periods. To this point: “The strange thing is that the economic recovery is now going for a record length and the unemployment rate has not been as low as it now is for decades.” Economists tie the wage gain issue back to the lack of productivity improvements over the same period. In fact, a rather sizable “gap” has evolved over the years, which has yet to be adequately explained. 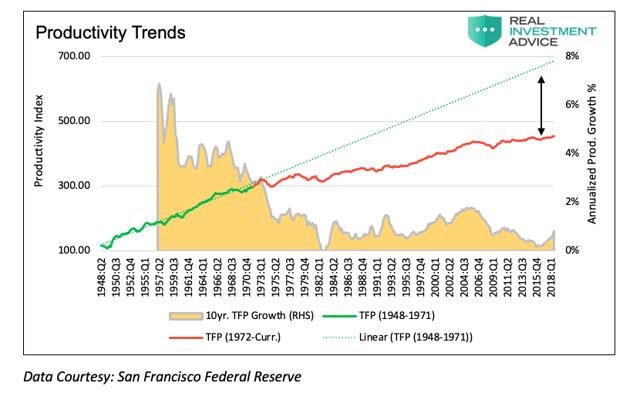 When the financial crisis hit a decade back, the central bank under Mr. Bernanke decided that they had to employ “unconventional methods” to address the issues at hand. Near-zero interest rates and Quantitative Easing programs were instituted to flood the system with liquidity and encourage risk-taking in ongoing investment decisions. The rest of the world followed the Fed’s lead and is now mired in bloated balance sheets and stagnant economies, due in part to enormous increases in fiscal spending supported by debt. Current debt service requirements have stolen the growth from future periods.

The Fed is also planning to curtail its balance sheet normalization program, allowing current securities to mature. At some point, global central banks will have to deal with their respective portfolios, as represented below: 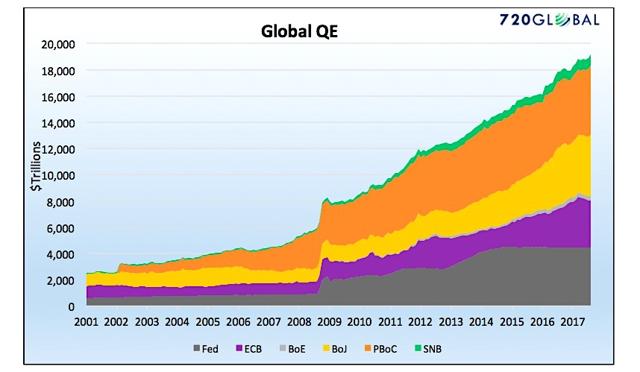 What has been the consequence of the Fed’s “unconventional” policy moves? The label now used by economists is “credit inflation”. Cheap credit made a mockery of basic market controls that govern asset allocations in the free market. In fact, inflation was apparent to a large degree in these “other” assets, while consumer prices remained low. The resulting asset bubbles have been perplexing, an outcome that was unexpected.

Who gained from these policy manipulations? Here is one economist’s opinion: “My belief is that this credit inflation, which was the product of both the Federal Reserve System and the fiscal policy of the Federal government, was jumped upon by the wealthy and financially sophisticated in the United States. As a consequence, income inequality became a huge problem in the United States.”

The top 1 percent and top 10 percent of income earners were the major beneficiaries, creating an ever-widening gap over the past few decades. This economist goes on to add: “The basic argument is that the Fed’s low interest rates were allowing “sophisticated” investors the opportunity to sweep up financially distressed assets and then “flip” them for tremendous gains. The “sophisticated” had learned well over the past fifty years how to take advantage of government policy that didn’t change.”

These outcomes are not just happening in the United States. Similar forces of inequality have spread through other developed economies, resulting in the wave of populism and discontent that has swept the globe. What is the solution? The general thinking is that central bankers got us into this predicament. They need to develop a better understanding of how today’s “modern” economy works. It is definitely not according to models that have been used for the past sixty years. The clock is ticking, too. As stock prices have accelerated while consumer prices lay dormant, households have benefited, but the reappearance of massive asset bubbles does not bode well for the future: 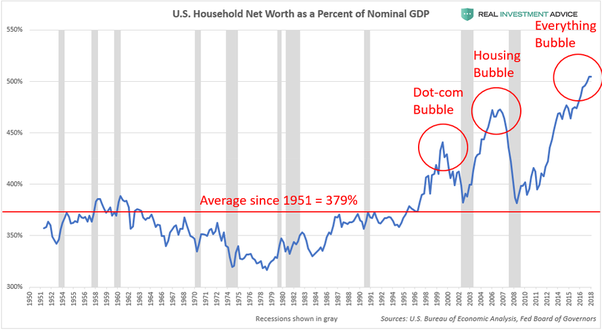 What are Chairman Powell’s latest thoughts on these relevant issues?

The chairman of the Fed is required to appear before Congress twice a year to review monetary policy and answer any questions posed to him. After only one day of testimony, we have a unique perspective on what the direction of the Fed is at the moment. While Mr. Powell would never use the word confused, his comments do reflect that the Fed members are currently re-thinking their policy directions. As he says, they will be “patient” going forward.

Here are a few more of Mr. Powell’s comments on the record:

The Fed’s semi-annual checkpoint has revealed a group that is questioning the way forward that had seemed so certain just a few months back. The fact is that today’s economy is different. It does not respond as it has in the past to variations in monetary policy. Mr. Powell’s testimony demonstrates that the path forward is filled with uncertainty. No mention was made about the potential for a recession, although Powell did reiterate that the U.S. economy is strong and expanding, but at a slower pace.

Economists, however, find $22 trillion in national debt as more than troublesome, especially since Congress must once again debate raising the official debt ceiling during the first week in March. The consequence of a decade of low interest rates and excessive liquidity has been slower growth as deficits and debts on a government level have also expanded across the globe. Debt only borrows potential growth from the future, or so we are told by economists, but politicians seem unwilling to face difficult decisions, while a wave of populism sweeps developed countries.

Something needs to change, but for now the leading central bank of the world has chosen to be “patient”. In Powell’s own words: “We’re in no rush to make a judgment about changes in policy. We’re going to allow…the data to come in.” Financial markets had been worried for months that the Fed might overshoot the mark in its rush to implement its normalization plans. These concerns now seem to be part of the distant past, as the Fed now appears more than accommodative. And now we wait…

The post Fed shifts back to neutral citing international concerns and uncertainty appeared first on Forextraders.com.