The data today in the US came in better than expectation and higher vs last month, and that helped to propel the USD to the strongest of the major currencies today. The AUD was the weakest on the day.

The USD was the strongest of the majors for the 2nd day in a row today (see ranking of the major currencies below). There were three main catalysts fundamentally that helped the greenback. 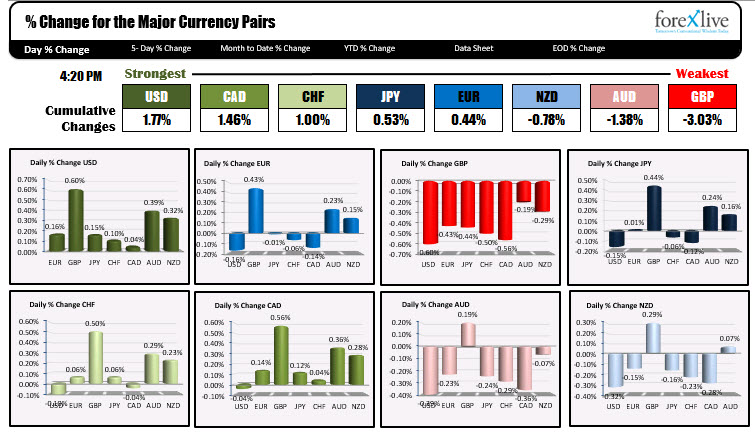 One was the surge in the Univ. of Michigan consumer sentiment (expectations and current conditions also rose nicely. For the headline number it soared from 97.2 last month to 102.4. That took the index to the highest level in 15 years. The expectations componen also soared 96.0 from 87.4 last month. It too was a 15 year high.

The 2nd main catalyst, was reports throughout the day that the US/Canada/Mexico would abolish the steel and aluminum tariffs along with other retaliatory tariffs including Kentucky bourbon and dairy products. They also pledged to finally work to ratify the USMCA trade agreement which has been in limbo for a number of months, largely due to the tariffs which remained (now that wasn't hard, was it).

The third catalyst was that the White House will postpone tariffs on EU and Japan auto cars and parts for 180 days.

Now it was not all rainbows and unicorns. The day started on a weak note with concerns about the US/China and ended the day with same concerns.

In the Asian session, Xinhua and People's Daily carried pieces saying China may have no interest in continuing trade negotiations for now. Later in the day, Hu Xijin of the Global Times tweeted that

China will certainly retaliate for barbaric suppression Huawei received. It's a unanimous attitude of officials and ordinary people. I believe Beijing is selecting retaliation targets and approaches, minimizing damage to itself and not weakening confidence in China's opening up.

Scheduling for the next round of talks is "in flux" because it is unclear what the two sides would negotiate, two sources said. China has not signaled it is willing to revisit past promises on which it reneged earlier this month.

The last tweet, sent US stocks lower. The major indices ended the session lower on the day and nearer the session lows. Below are the low to high trading ranges and the close levels.

That fall, took some of the bull out of the USDJPY, USDCHF. The US and Canada trade news, also benefitted the CAD more than the USD and helped to weaken the USD a bit in the NY afternoon session.

The NZDUSD and AUDUSD are also ending at the lows for the week. Each were hurt by the breakdown of US/China talks. For the AUDUSD this week, the jobs report showed unemployment rising to 5.2% from 5.0%. That sent analysts to calll for a cut at the next RBA meeting on June 4. Time will tell.
Wishing you all a great weekend. Thank you for your support.

error: Content is protected !!
We use cookies to ensure that we give you the best experience on our website. If you continue to use this site we will assume that you are happy with it.Ok